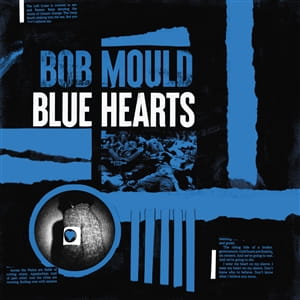 Availability: na wyczerpaniu
Delivery: The price does not include any possible payment costs check the delivery methods
Price: $32.18 32.18

In the winter of 2019, Bob Mould bucked the era's despair with his most melodic, upbeat album in ages, "Sunshine Rock". Cut to spring of 2020, and he has this to say: "We're really in deep shit now." That sentiment informs the new full-length album, "Blue Hearts", the raging-but-catchy yin to "Sunshine Rock"'s yang. To be sure, we were in some shit back in 2018, when Mould recorded "Sunshine Rock" with longtime colleagues Jon Wurster (drums), Jason Narducy (bass), and Beau Sorenson (engineer). Back then, he had a song called "American Crisis" that didn't fit the album. "That song is the seed for what we're talking about now," Mould says from his home in San Francisco during the COVID-19 lockdown. "At the time, it just seemed too heavy. Today it seems fucking quaint." "American Crisis" is the third song in a walloping first half of an album that spits plainspoken fire at the people who fomented this crisis. "This is the catchiest batch of protest songs I've ever written in one sitting," he says. Recorded at the famed Electrical Audio in Chicago with Sorenson engineering and Mould producing, "Blue Hearts" nods to Mould's past while remaining firmly planted in the issues of the day. Acoustic opener "Heart on My Sleeve" catalogues the ravages of climate change. "Next Generation" worries for who comes next. "American Crisis" references "Evangelical ISIS" and features this dagger of a line: "Pro-life, pro-life until you make it in someone else's wife." "There are songs that have no room," Mould says, laughing. "The other songs, there's room. There is room for imagination on the second half of the record." That's where the songs turn personal in a different way. Tracks like "When You Left," "Siberian Butterfly," and "Everyth!ng to You" are grounded in personal relationships. "Racing to the End" captures the economic disparity of Mould's neighborhood, and "Leather Dreams"_ well, _ "Leather Dreams," "Password to My Soul," and "The Ocean" were composed during a writing binge when Mould stayed up for three straight days. "Songs just kept coming out," he says. "'Leather Dreams' and 'The Ocean' both appeared within hours. I barely remember writing them." That feels right for an explosive, hook-laden album like "Blue Hearts". Only there's nothing forgettable about it.