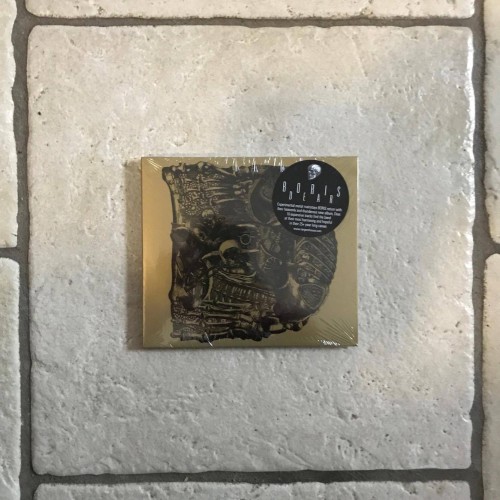 There is one constant thread running through Boris' sonic persona over the last quarter century: "heaviness." For them, the word is not only an adjective, but an operative verb. It's what unites fans, though this power trio have never made devotion easy. The size of their catalog -- some 23 albums, countless splits, EPs, flexi-singles, collaborations, etc. -- is in itself intimidating. More than this, their relentless creative restlessness has traveled through everything from doom, drone, and black metal to stoner rock and blistering, hook-laden, shoegaze pop. The process that led to Dear was rocky but fortuitous. Boris had already decided on a farewell album. They had re-released the almost universally acclaimed Pink on its tenth anniversary (the album that led to their flirtation with "mainstream" success) and were on the road playing it in its entirety. For a band of their musical ambition, what was left to say? The tour and its reception proved inspirational. Returning to the studio, new ideas started pouring out. They cut three albums' worth of material, all of it usable. They culled the sessions to ten songs -- reserving the rest for future releases -- and this is the result. On Dear, Boris again prove their mettle as rock leviathans. They look back to the glacial power drones of yore on "D.O.W.N. (Domination of Waiting Noise)" and follow it with "Deadsong," a monstrously evil doom jam whose quaking power sends shockwaves to hell. Guitarists Takeshi and Wata, in all their downtuned glory, chop sludge riffs from their feedback attack as drummer Atsuo walks the tightrope between the processional and mayhem. "Absolutego" is the set's first single. Its title looks all the way back to the band's debut album, but this brief, riff-laden stoner pop anthem has little in common with the former's lone 60-minute droning amplifier worship. Abstraction and sheer noise (reflecting the influence of Merzbow, one of their more frequent collaborators) introduces the elegiac drone in "Kagero." Amid the squall, Wata's sweet vocal offers a haunting melody, adding a textural dimension to unmask a crack in the armor. The reference to shoegaze returns briefly amid the swirl of power electronics and bass drum throb in "Biotope," where melody holds fast even as chaos attempts to claim the center. The nearly 12-minute "Dystopia (Vanishing Point)" is introduced by a melodica, shimmering guitars, and digital delay. Its first half is spacy; almost tender. When it explodes, it's ragged yet majestic, with peeling guitar solos, and thunderous kick drums and cymbals. The nine-minute title track closes the set on a power drone driven by Wata's spine-quaking bass. Power chords and loosely tuned tom-toms accompany Takeshi's feral growls that actually touch on the blues. It's a monolithic conclusion to be sure. It serves as a reminder -- as if you needed one -- that it's Boris melting your face off. Dear is proof positive that this trio are far from running on empty; hopefully, the rest of these sessions will see release soon. ~ Thom Jurek