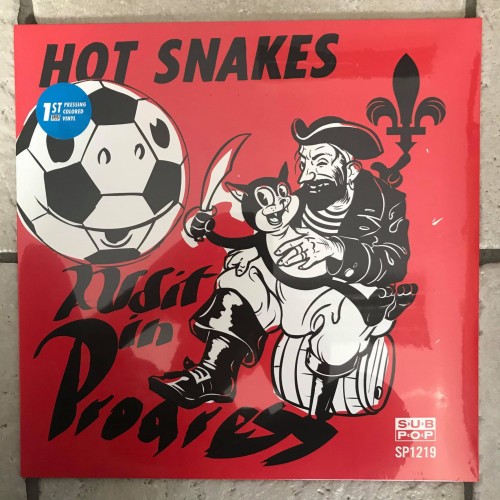 Pitchfork:
Following 2002's killer Suicide Invoice, former Drive Like Jehu frontmen John Reis and Rick Froberg replace Hot Snakes' original drummer Jason Kourkounis with Mario Rubalcaba of Rocket from the Crypt and Black Heart Procession.
Let it never be said that the Swami doesn't love the rock. When the turbaned one isn't disinterring forgotten gems from the lightless mines of classic punk, to reissue them with bonus tracks and modern production values, he's seeking out new bands that replicate the glory of '77 with striking fidelity and a rigid perma-sneer. Thus has it come to pass that Swami has reissued infamous San Fran garage-punks Crime twice in 2004-- first, the Crime CD San Francisco's Still Doomed, and again, in the guise of the third Hot Snakes LP of heat-seeking proto-punk, Audit in Progress.Hot Snakes is the latest chapter in a long-running partnership between John Reis and Rick Froberg, who began grinding out antic, gasoline-doused rock together in the band Pitchfork, then attained indie immortality with their math-punk band Drive Like Jehu. The duo parted ways for a while in the mid-to-late-90s, as Reis attempted to capitalize upon the temporary commercial viability of his other band, Rocket from the Crypt, and Froberg pursued his visual art, the distinctive, stylized line work that now adorns Hot Snakes CDs.Reis and Froberg reunited around the turn of the millennium, with Delta 72 drummer Jason Kourkounis providing the robust rhythmic chassis. Unexpectedly, the spirit of Jehu was revived, to the enduring elation of fans still lamenting their break-up after their seminal swan song, Yank Crime. There are numerous, comparative ways of understanding Hot Snakes-- a more concise, streamlined version of Jehu, or RFTC without the greaser sensibility and wailing saxes. But they're best discerned on their own terms: a desire to carry on the legacy of classic punk bands like Crime (roiling, distressed rock riffs) and Suicide (menacing, propulsive rhythms) with a minimum of modern revision.
IT IS ORIGINAL SWAMI RELEASE