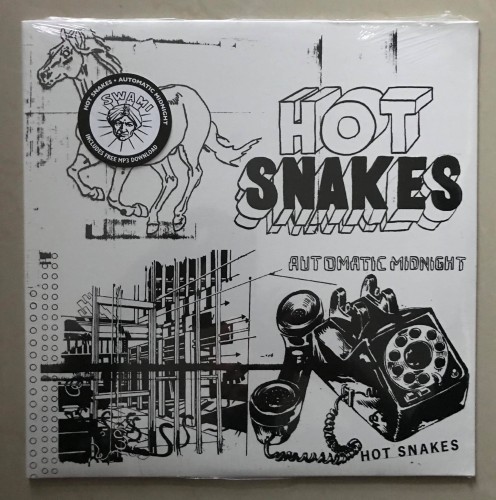 Pitchfork:
in't nothing wrong with a little predictability every now and again. Let's face it: when you pick up a record by a band with cover art like this, and a name like Hot Snakes, you have a pretty good idea what you're getting yourself into. Automatic Midnight is no feast for the eyes. And judging by those first couple of sentences, this review's nothing special, either. To do justice to Hot Snakes, though, it's got to do its job predictably-- and do it predictably well.This particular breed of Hot Snake could hardly come from a better line of descent. John Reis and Rick Fork (aka Speedo and Eric Froeberg, respectively) are the boys that brought you Rocket from the Crypt and Drive Like Jehu, and drummer Jason Kourkounis of The Delta 72 adds a percussive x-factor to the proceedings. These three mesh like well-worn gears, dousing the machines of their history with fresh oil.Hot Snakes commit a revival, and one not too conceptually distant from the Credence Clearwater camp. These guys refuse to be anything but what they are. The opener, "If Credit's What Matters I'll Take Credit", betrays a bit of Fork's Fogarty leanings. Where Reis once tied his CCR to vintage-sounding roots-rock perfection and took all the blame and fame, Hot Snakes confidently delve deep into the proven past of Rocket from the Crypt and Drive Like Jehu, certain they'll turn up gold. "I'll Take Credit" showcases Fork's signature falsetto bawl; his unintelligible exhortations achieve meaning through sheer ferocity. The drums may ache more than Fork's throat at the end of this one.Cleverly buried Americanisms litter Automatic Midnightthroughout. "Apartment 0," heavy on toms, less so on direction, wants badly to recall instrumental surf-punk. Instead, it lurks the San Diego shore in shark-like search of a fallen surfer. A similar pound on "Our Work Fills the Pews" introduces a lyric/retort sermon, preaching the kind of swagger that's kept Royal Trux's collection plate full for so long.In the end, Automatic Midnight makes you want to drive a littler faster down a potholed road, turn the stereo up a notch higher than usual, and nod minutely at anyone annoyed by your raucous passing. The smashing of the millennial barrier hasn't broken anything in Reis and Fork's model for San Diegan dominance. And what ain't broke, Hot Snakes ain't fixin' here.