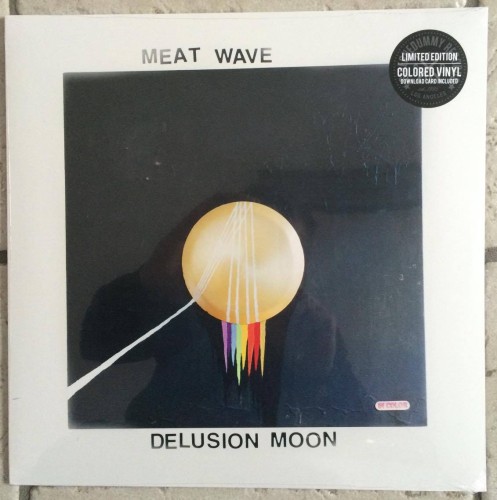 http://www.thelineofbestfit.com/ gives this graet record a great revue: From the opening riffs of “Delusion Moon” to the closing chords of “The Gay Contempt”, Meat Wave’s return is nothing overly complex, but in their simple set up the Chicago trio have found their forte.
Described by the band as "madness, destruction, death, life, conflict, humanity, confusion, and delusion," Delusion Moon tackles complicated issues with an astute dexterity.On the surface, the band's driving rhythms, blaring refrains, and echoing words provide ample enough to get excited by. Amped up to eleven,Delusion Moon is flooded with an energy that veers on volatile, and there's plenty here for listeners to lose themselves in.Delve further into the album's thirteen tracks and you find that alongside the thundering percussion and explosive guitars, there's a wry commentary on everything from society to the supernatural. It's pure expression, a band in full force, and it's fully enthralling.Opening title track "Delusion Moon" storms as it stutters into life, kickstarting the revolutions of a record that can occupy your mind as much as it engages your energies. "Network" kicks off against virtual interactions, whilst "Cosmic Zoo" bludgeons through day-to-day struggles with a whirlwind ferocity."Witchcraft" races with an ethereal intensity, pausing for a near-spoken word breakdown that'll leave your hair standing on end. "NRA" powers with as much fuzzed up ferocity as the band can muster (and that's a lot). "You can’t take my rights away but you can take my fears," Chris Sutter hisses, a poignant cry that echoes with you long after the track ends.With it's varied tempo changes and levelled layers, "I Was Wrong" demonstrates the three-piece at their most sprawling and potent, taking just over three minutes to transport the listener through a seemingly endless series of dynamics without once seeming crowded.Delusion Moon is dark and cynical. It's full of disaster and it offers no comfort or conclusion. But for it's forty minute duration, Meat Wave's second record is one of the most engaging you're likely to find this year.
http://meatwavechicago.bandcamp.com/album/delusion-moon