No Trend "Too Many Humans +extras" deluxe box set 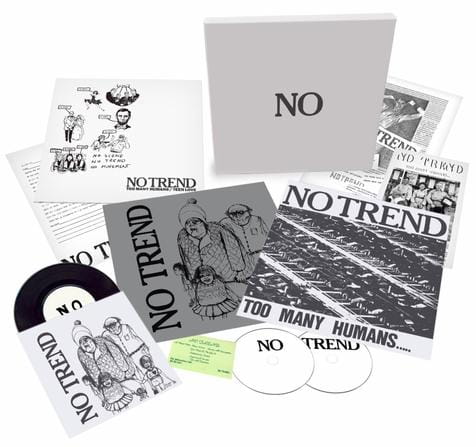 Washington, DC (home of the worst corruption ever known), wasn't always like this. In the early 1980s, it was home to the world's most vital, distinguished hardcore punk communities. With Minor Threat, Dischord Records and an ascetic straight-edge lifestyle that disdained booze, sex, and drugs, the city made a name for its loud, fast music and righteous progressive politics - a latter-day Camelot. Hailing from the unhip suburb of Ashton, Maryland, No Trend presented a sneering alternative to that sanctimonious ethos. Cynical, surreal, and eager to call attention to the hypocrisy of both Middle American norms and supposedly free-thinking subcultures, the band mercilessly baited its audience, dressed in atrociously kitschy clothing, and antagonized fans and foes with grinding dirges and contemptuous, tragicomic lyrics. Despite much local hostility, No Trend managed to make a name for itself nationally, touring often and gigging with the likes of Dead Kennedys, Sonic Youth, T.S.O.L., Hüsker Dü, Flaming Lips, Butthole Surfers, Soundgarden, and countless others. This long-needed, utterly essential compilation of No Trend's early years includes their cacophonous first LP, Too Many Humans, BOTH versions of the "Teen Love" EP, plus a CD containing demos and two '83 live shows, plus digital versions of the studio records. Additionally, ALL inserts and ephemera from the original releases and shows that could be collected from the era (and there was a lot) have been recreated to produce a true facsimile of the time. Provided you use your imagination! That's gonna be the hard part. These artifacts defined No Trend's sound and image in '83 and '84, and are responsible for how the band is remembered today: as one of the most toxic, iconoclastic punk bands of the era. A 42-page booklet was assembled from a variety of sources into a loose oral history, including additional photos, show flyers, contemporaneous fanzine reviews, and interviews with leader Jeff Mentges and No Trend's other surviving founder, Bob Strasser. The box also contains the infamous No Trend "dance" books (presumed lost until recently), as well as several other surprises. Remastered and recreated in perfectly lurid detail, this box set becomes available on May 29th. Listen to "Teen Love (12" Version)" on all digital platforms today for the first time!