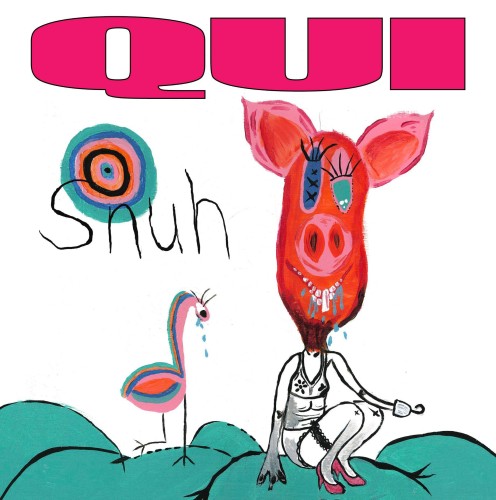 Qui!Yeah, Qui.  Qui is back with another installment of their own brand of avant-rock weirdness.  Having spent the last four years in an almost constant state of transcontinental delirium, they have pounded the pavement extensively throughout the US, Europe and beyond.  After eighteen years of crazy shows, long tours, hot shit collaborators, and exceptionally ambitious music, the Los Angeles duo of Paul Christensen and Matt Cronk shows no sign of slowing down.Qui’s latest LP, Snuh, extrapolates on their genre-bending brand of avant-garde rock.  Working again with long time producer Toshi Kasai, the duo has integrated more shades of unlikely forms and timbres along with their always-present penchant for abrasive noise punk.  Snuh is at once both playful and belligerent, switching abruptly from heavy to soft, screaming to crooning, sweet to hostile.  The record also features cameo performances from Justin Pearson (The Locust, Retox, Head Wound City, Dead Cross), Trevor Dunn (Mr. Bungle, Fantomas, Melvins, John Zorn) Dale Crover (Melvins) and Adam Harding (Dumb Numbers).In the years following the 2014 release of Life, Water, Living…, their last full-length, Qui have released a slew of singles, EPs, splits, as well as last year’s long player, Qui w/Trevor Dunn (Joyful Noise Recordings), featuring the acclaimed bassist.  Snuh is among their most ambitious records to date and will no doubt be a hit with fans of all things weird and obstinate.  Look for it on August 2, 2018 on Three One G and Antena Krzyku, with more worldwide touring to follow.