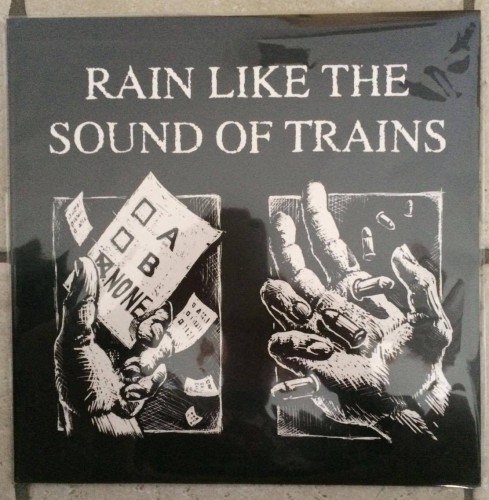 Sadly, time has all but forgotten Rain Like the Sound of Trains, despite the fact that the Washington, D.C.-based band issued an incredible album through long-running and well-respected label Dischord, a split release with their own imprint, Rebel Music.They made incredible music that opened many minds and hearts to alternative political ideas and ways of living. They also had a couple of single releases to their credit by the time they disbanded in 1995.Rain Like the Sound of Trains' music was funky, quirky, very rhythmic, and percussion-based, with jangely, clean guitars, fluid bass lines, and a dual vocalist approach. Their sound confounded many more traditionally minded punk listeners yet astonished many more fans of punk rock, indie rock, and other styles of music with its depth, dexterity, and the overall level of musicianship amongst the band's earnest members.Rain Like the Sound of Trains specialized in deliveringeducational, informative, and challenging anthems against the status quo, questioning the American educational system, the concept of history, diet and nutrition, the logging industry, the two-party political system, and consumer culture with-well articulated, personalized, and somehow non-preachy lyrics.The band was formed by some ex-members of the seminal D.C. punk outfit Soulside -- a group that would also spawn Girls Against Boys.They issued a 7" single in 1993, containing the songs "Bad Man's Grave" and "Cooking With Anger." A second 7" followed featuring the song "What I Want," which also included a moving re-interpretation of the Clash classic "Washington Bullets."In 1994, they entered Texas' Sweatbox studios with producer Tim Kerr and recorded what would be their only full-length release. Graphic artist/musician Jason Farrell designed the packaging -- printed on 100 percent recycled paper -- for the self-titled album. The CD version also included both previous 7" releases.Shortly before issuing another small release (four songs recorded by Geoff Turner at WGNS Studios in December 1994 and released the following year as a 7" by Southern Records), the group went their separate ways, with members going on to join Sevens, Slowdime, and the Sorts, among other notable bands. ~ Ryan J. Downey
Members:
Bobby Sullivan - vocalsPete Chramiec - GuitarDoug Birdzell (aka Dug E. Bird)- BassJoshua LaRue (aka Josh Payne)- Drums
youtube