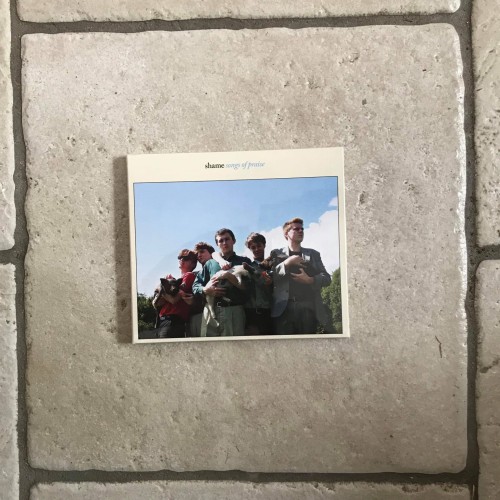 Shame have been together just over three years and in that time have become the most viscerally thrilling new band in the UK. They will release their highly anticipated debut album at the start of 2018.South London school friends Charlie Steen (vocals), Sean Coyle-Smith (guitar), Eddie Green (guitar), Charlie Forbes (drums) and Josh Finerty (bass) formed the band in a practice space at the infamous Queen’s Head in Brixton. Given three long months - rather than the usual six weeks - to fill in June 2014 after their AS levels, starting a band seemed the best use of that time for everyone.The Queen’s Head was a lawless space where The Fat White Family rehearsed. "We kind of just took refuge there," says Forbes. "The Fat Whites didn't really know we existed for a while until we started using their stuff as we didn't have any instruments."It was the filthy incubator that shaped the band and opened their eyes to whole new ways of life as the much older freaks, dropouts and misfits of South London who frequented it treated it like a freewheeling community centre. "You could do whatever you wanted there," recalls Steen. "Nothing was off limits."By Christmas 2014 they got their first headline show at The Windmill in Brixton and ran into likeminded bands their own age such as Goat Girl (now signed to Rough Trade), Shark Dentist, Sorry (now signed to Domino) and the Dead Pretties. An embryonic scene was taking shape at the venue and the catalyst was to be Chimney Shitters, Shame’s semi-regular night where they handpicked three other acts to play and they headlined. Following this, they landed a series of support slots. First with California punk band The Garden - where they played their first run of shows outside of London - and then with The Fat White Family where they played Ireland for the first time.A pivotal show at The Great Escape in Brighton in 2016 was both disaster and triumph. First, they were threatened with a bill for £700 for damage to a venue. "I tore down a chandelier by swinging on it Adam & The Ants-style," admits Steen. However, JD Beauvallet of Les Inrockuptibles saw them at that show and wrote an effusive two-page feature on them that helped get them booked at Pitchfork Paris in October and land their first TV appearance on France’s Le Grand Journal. "It was so surreal doing live TV," says Forbes, "but that was the moment it dawned on us that we might be onto something."While on tour with Slaves, they released their debut single - The Lick / Gold Hole - on Fnord Communications. Recorded and produced by Dan Foat and Nathan Boddy, they would go on to do Tasteless, the band’s second single, in March 2017 and record their debut album. Just before that, they put out a video for Visa Vulture, an attack on Theresa May’s stance on immigration and described by Steen as "the worst love song ever".Warpaint, having seen them at Pitchfork Paris, gave the band a support slot on their UK tour in March 2017. As a band that is rarely off the road, they have played over 47 festivals this year and "well over" 130 shows in total. "We have always wanted people to talk about the show after they have watched us," says Forbes. "If you are talking about it we have done something right."After fielding multiple record label offers, Shame signed with Dead Oceans in early 2017. They recorded debut album Songs Of Praise in Rockfield in Wales in 10 days. At just 10 tracks and a run time of 39 minutes, it’s a compression of everything they are about. "We wanted our first album to be concise and to the point," says Steen. "No bullshit."Picked as the first single from the album in September, Concrete is "about someone who’s trapped in a relationship and they’re being pummelled into surrender" according to Steen, its call-and-response vocals swinging between self-doubt and assurance.Lead single into album is One Rizla. The track is about embracing insecurities, something which Steen had to do when the band first started playing live - taking his shirt off, getting right into the crowd, commanding such a ferocious live show.Tasteless is a neat compression of Shame’s latent pop sensibility, a tightly wound rallying cry against creeping conformity. "It is looking at what effect indifference can have on a person and if you're willing to move forward or if you're stuck on certain smaller issues," explains Steen.The standout moment from their live shows, Gold Hole leans heavily on a sense of disquiet - steadily building, dropping down to a sinister pant, finally erupting in a frenzy. "It's the debate about the difference between exploitation and empowerment," says Steen, "looking at sexual labour through a stereotypical tabloid perspective."Angie is a dark and epic closer, its musical chiaroscuro hinting at where the band could move next. Steen calls it "a dark love story" where "a guy is in love with this girl at a young age and she kills herself but he's still feeling so much love towards her". It builds from a gentle three-note intro to a towering conclusion that distils the beauty, pain and darkness of the story behind it."We are trying to capture a moment that has yet to cease - something that is ongoing and developing," says Steen on what Shame’s driving force is. "Something that is honest in a lot of ways. None of these stories are fabricated. They are all, unfortunately, true."