The Ex "Catch My Shoe" LP 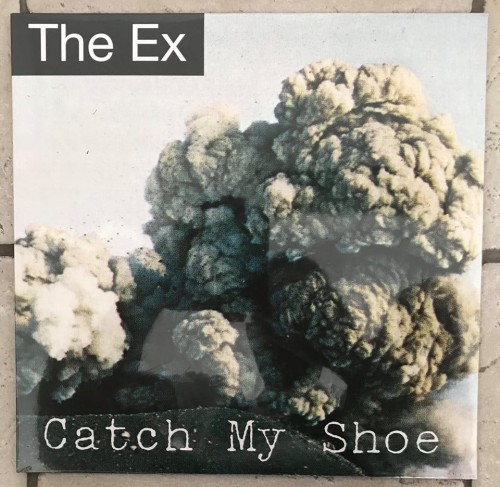 "‘‘It doesn't sound good on paper: Classic 30-year-old punk band loses vocalist, replaces him, and immediately records and releases a new album. Imagine the Buzzcocks with a ringer on the mic, for example. But the Ex is no ordinary band. This is possibly the most evergreen band that's ever existed, and Catch My Shoe is no exception. G.W. Sok's back-of-the-mix Cockney half-bark is missed, but his replacement Arnold de Boer, of Ex collaborator Zea, does a remarkable job in his stead, offering a voice of an entirely different power, a weird combination of loud and calm, between seething chant and pub-conversational. But, more than that, he offers a third guitar and, oh my, the sweeping result is like the hot, burning wind that comes right before an approaching forest fire.But the new member is only part of the story. The Ex doesn't change, it evolves. In recent years, the band's been working with Ethiopian sax legend Getatchew Mekuria; its most recent output was a 2006 collaborative record with him. If you were lucky enough to see the Ex play with Mekuria and a full horn section two years ago at the Ottobar, you already have some idea of what the band can do with horns and African influence in general. Which would be the sort of seamless fusion that belies the word, or what happens when an artist approaches another culture with earnest curiosity about its music (versus trend-sniffing).So, yes, take punk rock that manages to be both sweeping and sharp/angular enough to almost cross over into "math" and rewire its DNA with a blessed torrent of brass and crazy rhythms. Dig when it goes full-bore post-everything on "Eoleyo", in which drumming powerhouse Katherina Bornefeld takes the mic with the sort of traditional African vocal style that in the hands of any other Western band that comes to mind would be the sort of ugly exploitation/appropriation that gets Vampire Weekend bad write-ups. The Ex, of course, still has doomsday politics well intact: "Do you still watch a flat TV?/ Do you still listen to MP3s/ Well, no one has computers anymore/ Because cold, cold weather is back!" The Ex is the sort of band that can sing it, chant it, or shout it, and you just know that it's right. And, in some form, the band will be rattling the dull world's cage until cold weather is, indeed, back.’’ Baltimore City Paper