VA "THIS IS KOLOGO POWER" LP 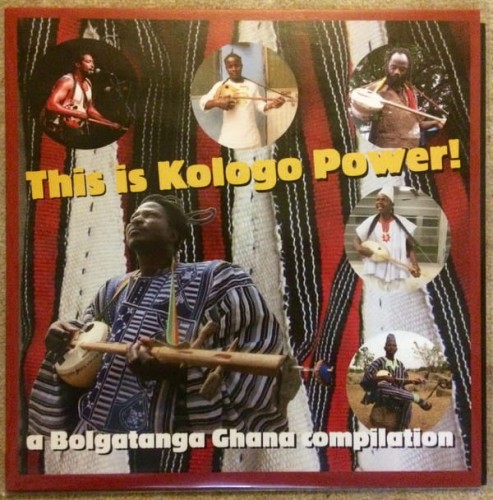 Track Listing:01. King Ayisoba – Africa Needs Africa02. Ayuune Sule – Who Knows Tomorrow03. Agongo – I Am Suffering04. Prince Buju – Afashee05. Atimbila – I Have Something To Say06. Atamina Feat. King Ayisoba – Africa Problem07. Amoru – Yabaa08. Barnasko – Nsoh Yaaba09. Asaa Naho – Home Witches10. King Ayisoba – NerbaThis compilation is an African initiative. King Ayisoba once told me “I want to make the world love kologo music like Bob Marley made the world love reggae music.”In 2014 I played on the launching of King Ayisoba’s V-CD “Kologo Spirit” at the cultural center in Kumasi, Ghana. The event started at three o’clock in the afternoon with a local children circus, then DJs and then a drumming group from the North East Region of Ghana, the region where kologo music is from. Around six the first kologo player entered the stage and the open-air theatre was filled with about two-and-a-half thousand people, mostly Frafra (the popular name for people from the North East Region and the name of their language). Many kologo players followed that night, which went on until three in the morning. I must have seen about twenty for sure. But backstage there were more guys who didn’t even make it to the stage but were playing anyway, backstage, outside and around the scene. Ayuune Sule, Sambo, Stevo, Guy One and of course King Ayisoba played, the audience was amazing, lots of people entered the stage throwing money at the musicians, others came to dance, the night was seriously on fire. It was one of the most amazing musical events I have ever attended.Ayuune Sule and King Ayisoba told me later there are more than eighty-five kologo players already in and around Bolgatanga, the capital of the North East Region. And two years later I was going to see more. In January 2016 King Ayisoba invited me to Ghana again to join in on his “Batakari Festival” (“batakari” is the name of the traditional cloth many of the kologo players wear). One night in Accra and one night in Bolgatanga and I sure did hear and see many more kologo players and not only on those festival nights. Also in the pito-bars (“pito” is a traditional drink based on fermented millet), cafes, FM stations, houses and studios and at a traditional funeral in Bongo (a village near Bolgatanga) I saw lots of amazing kologo players.The idea of making a compilation had been discussed on our European tours already a few times. In the van we listen almost solely to kologo music and there is no lack of great tracks. So together we started picking out the tracks we really liked. There was one dogma: “no computer beats”. King Aysioba wants to show what is the real kologo power and that is made by, as he calls it: “man power”.Most of the tracks are recorded in studios in Ghana. Some are sung in Frafra, others in pidgin English. Some are with a live band and some are just solo kologo and voice. But all songs represent a force and unveil a very strong musical power. The connection between kologo music and (delta) blues has been made more than once and that resemblance is not written on ice; the personal and the social messages, the strong rhythms, the push that this instrument -with only two strings spanned over a goatskin on a calabash- can give to people to make sure they do not ignore the dance floor, all that makes it worth the work and effort of making at least one kologo compilation.So in January 2016, when meeting all the kologo players, I had the change to take pictures and do interviews with everybody. Which you find on the insert. And you should know this is just a tip of the syncopating savannah iceberg, but it’s a good start I think.