Listener "Time Is A Machine" 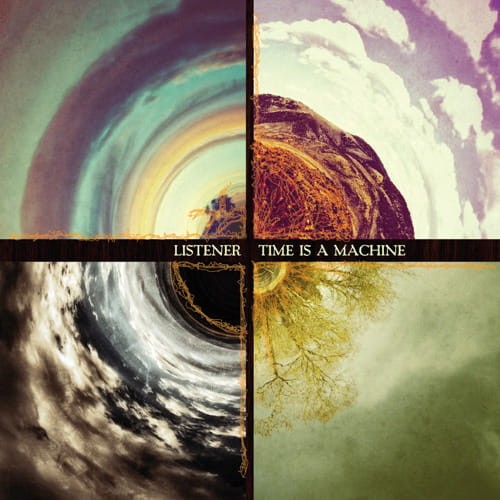 Re-Press Third studio album from US three piece, Listener. As with their previous two records, Time Is A Machine marks a definite shift in Listener's sound, particularly evident with the introduction of Kris Rochelle on drums. Musically this is a more powerful rock and roll driven record, coupled with ambient post rock moments and carefully layered instrumentation. Dan Smith deliberates strong poems about our human emotional tendencies dealing with hopes, hurts, and fears in his distinctively unique vocal style. You can separate underground music fans into people who have heard of LISTENER and those who haven’t. LISTENER is releasing their third album, Time is a Machine, and people everywhere are crying on cliff edges and carving their ex-lovers names into tree trunks in anticipation. What started as Dan Smiths’ solo hip-hop project in 1991 has morphed into a band that undertakes classic DIY-style tours, playing basements and private living rooms and bookstores, sending audience members running out in tears with their intensely personal lyrics. Once you hear this Fayeteville, Arkansas band, you will obsessively play songs, over-analyze lyrics and realize the words apply to all the frustrating, sad and mystifying areas of your life. You have been warned.
Thrusting a particularly fervent and confrontational sound that Dan Smith, Christin Nelson and Kris Rochelle term “talk music,” LISTENER is poetry over sound. Lyrics are laden with heartbreaking images: a wooden heart, wrecking balls, dams overflowing. This is Rainier Maria Rilke and Sylvia Plath by way of the American South. LISTENER’s second album, Wooden Heart (2010) brought them wider recognition, with the title track reminding us “we only have what we remember” over a yearning pedal steel. Dan’s Appalachian-influenced accent doesn’t so much sing as spit, shout, demand, yell and plead with you to see and accept the obvious. LISTENER’s sound has no equivalent, but the band has the energy early punk like Ian Mckaye projects MINOR THREAT and EMBRACE mixed the post-hardcore sound you would expect from MEWITHOUTYOU. The songs often have classic guitar tones coupled with intense and forcible horns. The rising and crashing crescendos are comparable to NEUTRAL MILK HOTEL, it’s sort of like a marching band run amok but still melodic enough to be relatable. This LP sees the band reflecting on the passage of time. LISTENER hasn’t sacrificed any of the edge and scariness that characterized earlier releases, but they are moving in a more pensive direction; the album is awash with quieter moments, amidst the sonic assaults. The album crashes into your heart with Eyes to the Ground for a Change, which has Wild West style guitar, like a saloon showdown that will end with everyone slumping over in defeat. Not Today is a fully-formed song: more approachable and traditional in terms of structure. The album features Dan’s gorgeous lyrics: Good News First asks for the good news first “to numb the pain.” Tornadoes reflects that you “didn’t leave/didn’t give up,” prescient in the light of the recent tragic tornado in Oklahoma. Everything Sleeps shows the more hopeful and positive tone of the album, telling us “If we give everything we have /every single time /everything we have every single time we may get to live/ what’s next.” For LISTENER fans, the answer is obvious. (NBHAP / Kika Jonsson)
https://www.youtube.com/watch?v=ET3Fk0Jf2OI&list=PL5EZrfPXHjC0gtmN1jr4XJLdPP1APsLZD